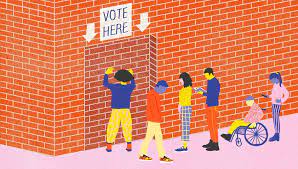 Firstly, we want to apologize for breaking our vow not to send more than one edition a week. We take that promise seriously and are only taking this step because an unexpected development arose that it seemed important for people to know. We appreciate your patience.

Berkeley – A puzzling (and completely outrageous) demand letter was filed by New Day Pacifica coordinators Jan Goodman and Beth Kean on Monday morning – and came to us in the evening of May 26th. The demand letter seeks to prevent Pacifica staff from being able to vote in their own election on the adoption of the New Day Pacifica bylaws. The reason?

If the staff, specifically at WBAI and WPFW vote no with an overwhelming turnout as they did last year during the prior bylaws referendum, they will be able to thwart the New Day proposal.

There are a number of administrative reasons why the request is a non-starter and we will mention them below, but before we do that, we just want to take a second to review the broader implications of the letter, which you can read here.

Referring to the staff election required in the Pacifica bylaws as a “staff veto”, the proponents of New Day make the very logical, if slightly fascist argument that if there are constituencies of voters who are likely to vote in opposition to their proposal, then the only way they can win is if those voters don’t count. If you think you’ve heard that line of reasoning in a few purple states recently, that is because you have.

But as with the South’s new voter prevention laws, it’s even more sinister if you take a look at the demographics. It is well known that Pacifica’s staffers, in general, are younger and more diverse, than the network’s donors and members. It is also well known that WPFW, in particular, and WBAI, to an extent, target a larger amount of their programming directly at Black and Brown audiences and do so more extensively than the Texas and California stations. So the “veto” in question is that of a more diverse constituency not necessarily agreeing with affluent Californians about what is best. While we can’t say if their assessment is accurate (KPFA and KPFK listener members both rejected the last bylaws referendum), we can say that questioning the legitimacy of voters who are not the largely white Californians who dominate the KPFK and KPFA membership base, has some disturbing overtones.

Goodman and Kean try to soften up their demand with accusations that East Coast Pacifica staffers are being pressured to vote no (as if New Day hasn’t overwhelmed Pacifica staff mailing lists with multiple emails for weeks demanding yes votes). It is a nonsensical argument since the election uses secret ballots counted remotely. They imply that WBAI and WPFW staff are prejudiced by the 2019 WBAI raid and 2017 “strategic plan” to sell WPFW. Goodman herself was one of the PNB minority who boycotted several national board meetings to delay the eventual PNB vote that the 2019 raid on WBAI was not authorized. But of course that is no reason at all why WBAI staffers, who were fired and locked out of their station for a month, might not be jumping up and down at the idea of installing Goodman as the vice-chair of the national board until 2024. It  must be because the staff are manipulated and brainwashed by evil overlords. That is condescending claptrap.

But besides the offensiveness of the demand, it fails on very basic grounds. Firstly, New Day Pacifica signed a memorandum of understanding or a contract with Pacifica prior to the referendum, whose terms they are seeking to materially change less than two weeks before ballots are going to be sent. The contract states that:

The voting process will be identical to the process and the rules used in February 2020.

So what is occurring is that someone who wishes to lead a national media outlet with millions of dollars of assets is trying to rewrite a signed contract because they are afraid the terms and conditions they agreed to, don’t guarantee them a victory in an election. They don’t teach you that in business school, or law school.

Moreover, the terms governing bylaws changes at Pacifica are contained in the bylaws themselves. They mandate that whenever voter rights are impacted by a proposal, the members must vote by class of membership i.e. listener members and staff members. Staff member voting rights are clearly impacted: instead of 6 seats on the local boards, they would have 2, instead of 5 seats on the national board, they would have 2. Unpaid staff who constitute 90% of the staff vote totals would only be able to vote for 1 of the 2 local and national staff representatives, with the other elected only by the small quadrant of paid staff on the payroll, greatly deleting unpaid staff representation in governance.

So what is occurring is that someone who wishes to lead a national media outlet with millions of dollars of assets is trying to skirt the network’s bylaws because they are afraid they don’t guarantee them a victory in an election. They don’t teach you that in nonprofit management courses.

We don’t know if Jan Goodman and Beth Kean are right that New Day  *cannot* win this bylaws referendum. Despite their clear belief in their own defeat, we encourage Pacifica members not to leave anything up to chance and to mark their calendars for the June 7 to July 7 voting period and make sure to vote NO.

But we do know that this latest bit of insanity should convince you that these are not the people to install at the head of this foundation. Reneging on signed agreements, misreading the bylaws, and trying to disenfranchise voters to privilege their favored constituency above others in a referendum are all big red flags.

When Pacifica in Exile’s editor debated Beth Kean on KPFA’s Full Circle on April 9th, Kean urged members to “listen to the staff” who she believed supported her proposal. Now she has changed her mind and says not only should we not listen to the staff, we shouldn’t even let them have a vote.